The Neuroscience Behind Learning

What does it mean to learn? What happens in your brain when you learn a new word, play a new instrument, or learn to shoot a basketball through the hoop? If we all have the same three-pound gooey jelly of a brain, why is someone able to learn faster than the rest? Let’s find out.

I’m inching towards the end of a neuroscience course that I’m taking where Prof. Idan Segev, a neuroscientist from Hebrew University, teaches everything from the neurochemistry of an action potential to what it means to have free will. As I’m slowly getting a hold of the fundamentals in this new arena from courses and papers, I realize there is a gaping hole in this domain.

You know how we totally get how an individual computer sends an email and we totally understand the broad concepts of the internet, like how many people are on it and what the biggest sites are and what the major trends are—but all the stuff in the middle—the inner workings of the internet—are pretty confusing? The brain is kind of like those things. We get the little picture—we know all about how a neuron fires. And we get the big picture—we know how many neurons are in the brain and what the major lobes and structures control and how much energy the whole system uses.But the stuff in between—all that middle stuff about how each part of the brain actually does its thing? Yeah we don’t get that. – Neuralink and the Brain’s Magical Future

This series will be my best attempt at trying to link the behaviors of our neuron to the behaviors that make their way out into the world. To start off, I wanted to pick a topic that lays the foundation for every aspect in our life: Learning.

Learn what it means to learn

When you first see this image below, you automatically associate it with a tree since it matches your past experiences of how a tree was classified. 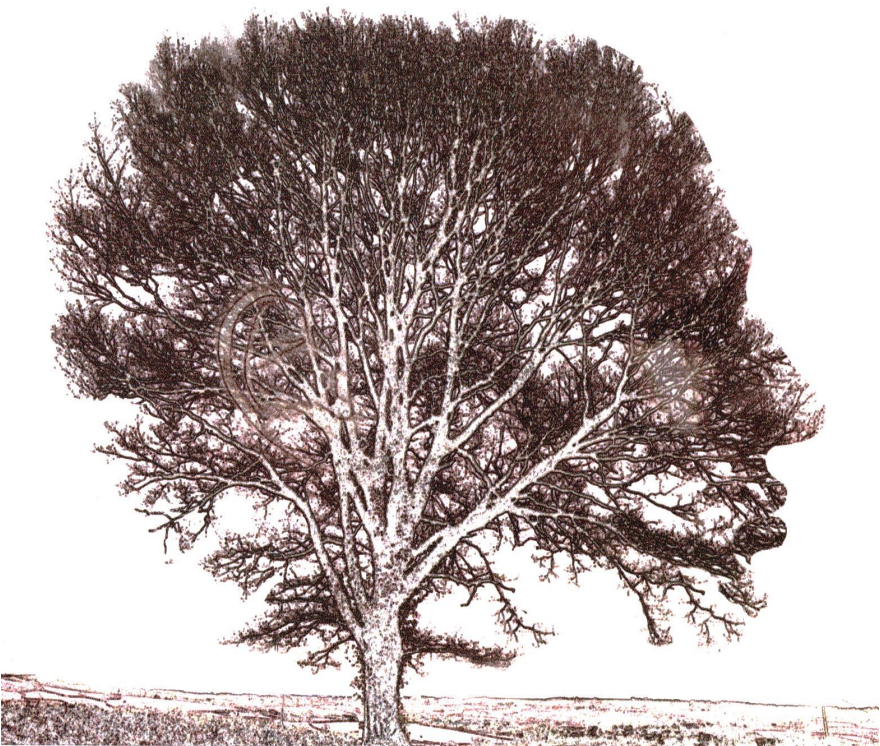 On close observation, you begin to notice that the image also looks like a human face viewed from the side angle. There’s a translucent ear on the left, a protruding nose on the right, and even a small mouth. See it? The next time you view this image, you won’t just think of a tree (at least, I cannot un-see the face anymore). What just happened? You learnt a new piece of information.

We learn new concepts everyday. We also build upon already learnt concepts, and un-learn some as well. I learnt how to properly pronounce unequivocally yesterday (uhn·ee·kwi·vuh·kuh·lee), and in the process substituted my previous memory of it (un·ee·kwi·vo·kah·lee). But what is happening inside my brain?

Every thought we have is powered by movement of chemicals (called neurotransmitters) that originate from the axon of a neuron and flow to the dendrite of another neuron through synapses when the action potential crosses a threshold. Phew. That was definitely a mouthful, so let’s break it down. 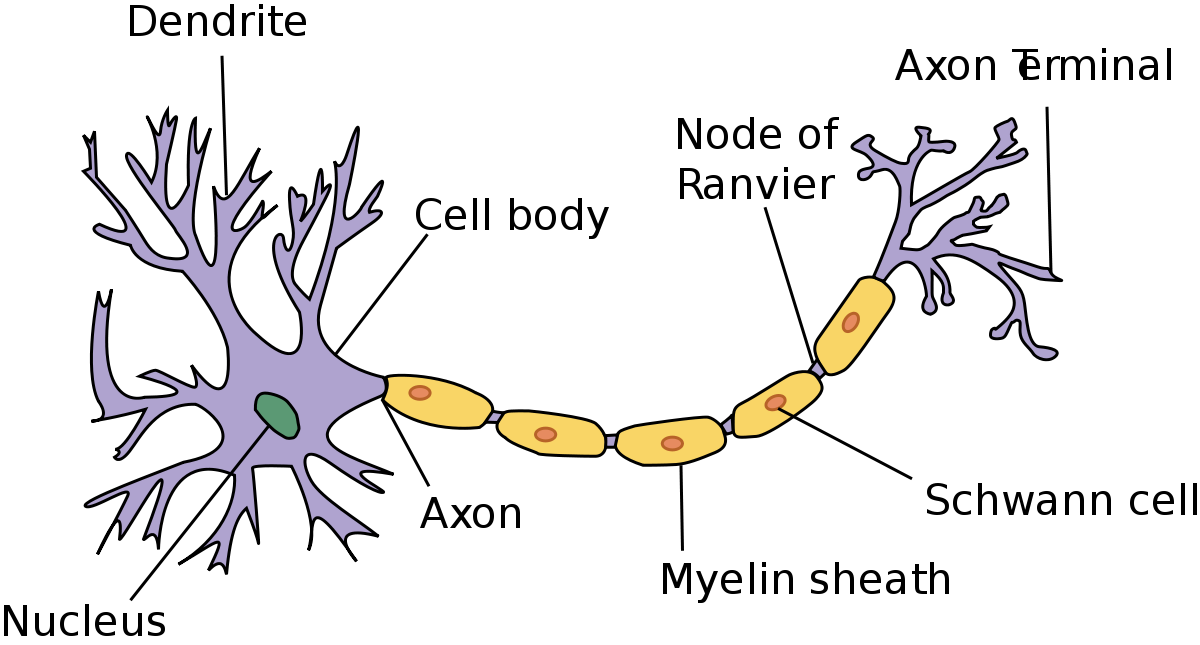 We begin with the fundamental units in our brain: neurons. There’s a good chance you’ve seen this image before, possibly in a neuroscience course in college or in a previous article of mine. This one structure above, when combined with 100 billion others, is what makes us love, laugh, and learn. Ramon Y Cajal won the Nobel Prize in 1906 for his brilliant work as a neuroanatomist: even before the invention of technologies like electron microscope, Cajal proposed that our brain was made up of individual cells and was not continuous as proposed by his predecessors. Even after 100 years, his hypothesis holds true.

In a very crude sense, if you treat the neuron as a stick figure human, dendrites are the hair, nucleus the head, axon the body, myelin sheath the clothing (which we’ll come to soon), and synapses the feet. Or, in other words: 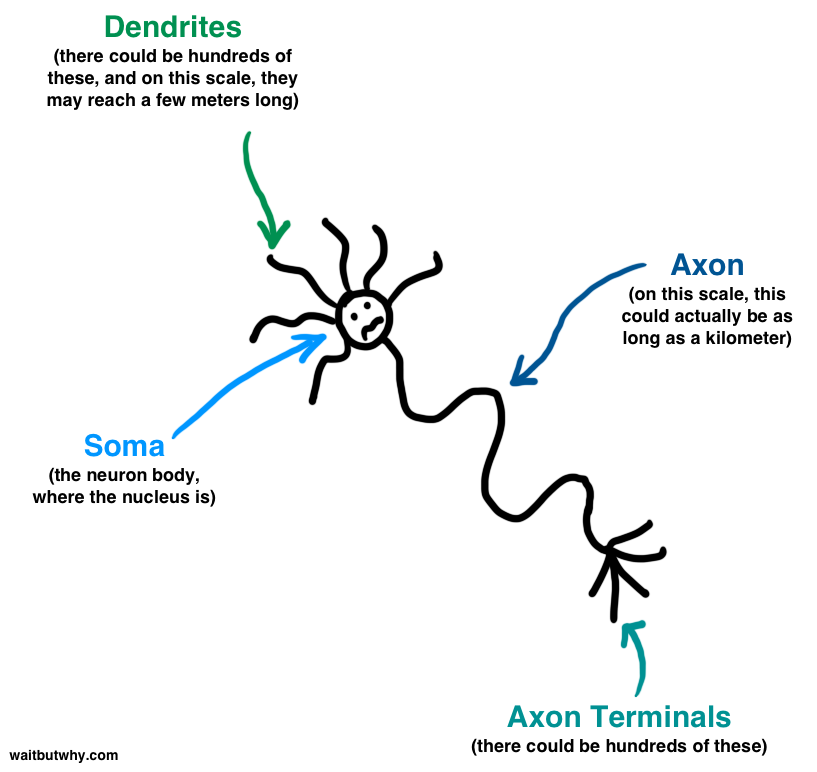 This guy above is always at a negative potential (~70mV) in the resting state, when no neurotransmitters are zipping through the body. That doesn’t happen often though, since trillions of signals are being fired inside your head every second. But, what makes a neuron fire? To understand that, we need the help of a giant squid.

The giant squid has a special property: a giant axon. An axon that is 1 mm in diameter and extends all the way from its head to its tail. On the other hand, the axons in our head have diameters in the order of micrometer (1000 times smaller than the squid). Using the squid, Alan Hodgekin and Andrew Huxley, two biophysicists, devised the Hodgekin-Huxley model that explained how action potentials are initiated. Also bagged a Nobel Prize for it.

Here’s what happens in laymen terms: each neuron is surrounded by a membrane that is picky in the ions it lets through. What are these ions? Mostly sodium, potassium, calcium, and chloride. Since they’re ions, they also carry positive and negative charges. Remember you read above that the neuron has a negative resting potential? It means the inside of the neuron is more negative than the outside. Every time the ions try to enter or leave the membrane, they either increase or decrease the negative charge.

And in those times when they decrease it, an action potential gets fired. Think of it almost as an explosion of electrical activity down the body of the axon when the resting potential becomes more positive and crosses a threshold. Now when this reaches the feet of the cell, it releases more chemicals that triggers the next cell. And the party continues.

A neuron can emit between 10 to 100 such action potentials, or spikes, every second. Now imagine 100 billion neurons going through this process, all connected to each other, constantly chatting. That’s what’s happening every time you learn something new, or just do anything.

Until I began to understand how our brain works, I thought this was a clichéd saying. But now I see this has scientific underpinnings.

Let’s say you’re dying to become a guitar maestro. When you begin playing the guitar on day 1, a specific set of neurons fire together to make that happen. As the days pass by and as your fingers begin to bleed, the set of neurons that tend to fire together are slowly becoming best friends. As they fire more and more together, eventually, they end up conveying the information faster because of this little thing called the myelin sheath.

Remember the guy turned neuron from above? The myelin sheath is the coating around the axon, or the clothing around the guy. This coating is made up of proteins and lipids and slowly starts wrapping around the axon as an axon is repeatedly fired. This protective coating increases the axon’s membrane resistance and lets the ion in or out only at specific points. By doing so, the action potential can now travel through the axon body much faster, with lesser distraction as seen below.

By day 325, as you become a maestro in playing the guitar, the neurons fire together so well that that it becomes what is famously known as muscle memory for you. Although it’s called muscle memory, the real change is happening in your brain, amongst the neurons.

Our brain is always looking to save energy. In fact, the entire brain runs just on 20 watts of power, equivalent to a dim light bulb. An equivalently powerful computer would need 24 millions watts on the other hand. Go brain. So the more times a set of neurons fire together, the less energy the brain allocates to them. Because your brain would much rather divert all this energy towards its default mode, also known as the day-dreaming mode, rather than in doing an activity. This is why after you get better at driving, you tend to begin day-dreaming as you drive sometimes.

Learning as an adult

When you’re a baby, your brain is exploding with new neurons and synapses as you learn how to walk and talk. This growth of new neurons is termed neurogenesis. Until a few decades ago, everyone thought this explosion of new cells stopped occurring once you became an adult. Thank god that’s not entirely true anymore. In 1962, Joseph Altman, a biologist, published a paper that hinted at the possibility of neurogenesis occurring in the celebral cortex of adult rats. This finding got ignored for a few decades until this reached the mainstream in the 1990s when it was observed in the hippocampus of humans. More specifically, in the dentate gyrus. 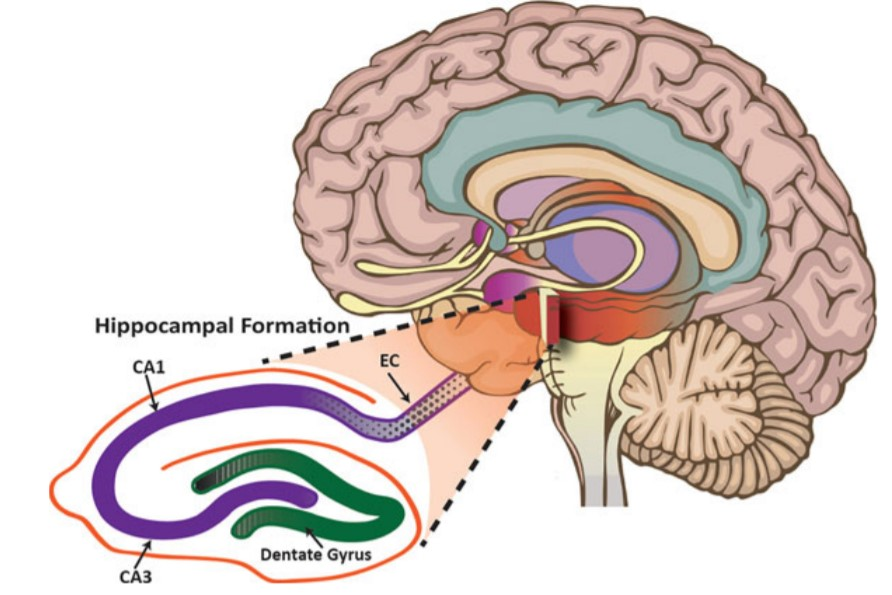 What’s a hippocampus? It’s the part of your brain that looks like a seahorse (where it gets the name) and acts as a scratch board for your memory. This is the region you need to thank for all exams you passed by merely studying the night before (yet forgetting it all once the exam ended).

While there is still some speculation among the neuroscientists on neurogenesis in adult humans, the evidence has been piling up. It’s great news for us all if this proves to hold true. It means we have the ability to recover from disorders such as Alzheimer’s and PTSD.

How can I learn better?

First and foremost, we know by now that neurons will never bend to our will. If we want to become an aficionado in a field, it will take months, or even years, of practice. I always get reminded of Cal Newport’s video on passion when I think about the topic of getting better. He says that passion is more often than not a side-effect of getting really good at something. It’s not the cause, rather the effect. The only way to get good at something, and eventually feel passionate about it, is to engage in deep work doing the activity. Slow and steady wins the race.

Second, you need to sleep enough. If there’s anything I learnt from the book Why We Sleep, it is that we all underrate the importance of sleep. Mainly because we aren’t aware of how important it is in transferring what we learnt the previous day from the scratch pad (hippocampus) into a long-term storage bucket (pre-frontal cortex). Also, who doesn’t like to snuggle with a warm comforter?

Finally, there’s also research that shows that physical activity enhances learning by increasing neurogenesis in our hippocampus. So the more you take care of your mental self by sleeping and physical self by working out, the better chances you have at winning a Nobel Prize some day.

See how a book is created

Ever wanted to see the behind-the-scenes of how a book is created? Making Of A Book is just that. Join me & 1,760 readers on this journey as I write & publish my second book. You’ll hear from me every Tuesday.